Menu
First and foremost, I’m so sorry for the delay in updating the blog. The last week has been a rollercoaster of activity and emotions. HOWEVER, I’m happy to report that MJ is home safe and sound. As you can see from the picture, he went from the lone 8-cell embryo from my third IVF (to review, I had 13 eggs but only ONE embryo to transfer) to the beautiful baby you see next to the photo. It was important to me that the first picture I posted acknowledged infertility and/or IVF in some way as without it, I don’t know if I would have ever been able to hold a baby in my arms. Yaaay modern science!!! 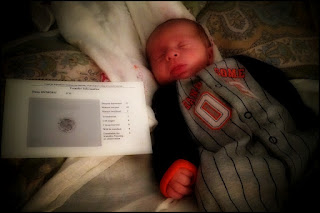 Secondly, after the last sad, scared, worrisome blog posting, I wanted to share with you two little lighter moments in the last week.

1.       The first night we brought MJ home, we had him in the bassinet portion of a Pack-n-Play. My husband, who clearly had other things on his mind what with both of us in the hospital, forgot to get batteries to make the Pack-n-Play vibrate. In a desperate effort, I found one of my vibrators (the Pocket Rocket to be specific, which I highly recommend) and tucked it away in the bassinet. I’m happy to report that it did the trick. I’m even happier to report that my husband, totally mortified by my “MacGyver-like-approach”, made certain to get the D batteries needed the very next morning.
2.       I didn’t realize the nursing pads were supposed to stick to the bra so for a good week, I’ve been sticking them directly to my breast. Lord only knows what the nurses in the NICU thought when they saw this. Although this was NOT how they were intended and although I feel like a total idiot, I do feel I inadvertently stumbled on a new design as sticking them to my breast kept them from slipping. I’m an idiot genius.

The Readers Digest version of the last week goes like this: MJ was officially diagnosed with Persistent Newborn Pulmonary Hypertension. This is defined as the failure of the normal circulatory transition that should occur after birth (you can read more about it here).  He was intubated, given proteins to help build up his lungs, closely monitored and he had both an arterial line and central line put in.

Since I got kicked out of the hospital, we booked the cheapest hotel room nearby and basically went back and forth from the hospital to the hotel. Although the hotel was not anywhere you’d want to steal soap or towels from, it was good for me as I could rest and recover when I needed to but be no more than a five minute walk away so that I could go visit my son whenever possible. It was REALLY F*CKING DIFFICULT to leave without him but I knew he was in good hands and more than anything, I wanted him to be where he could be given the best care.
His progress really started when one night, he peed a whole bunch and MJ’s doctors were super excited about this. They said that was him losing excess fluid from his lungs. Who knew peeing and lungs were at all connected???

Then, the next day, they took him off of the intubation (still giving him oxygen support to be safe) plus they also removed the arterial line. Luckily, he responded well. His respiration, heart rate and blood pressure all started improving so we then saw if he knew how to eat/suck from a bottle. After he passed that test, they removed all breathing support and we tried breastfeeding. Like any man, he was all about the boobs, so they removed the central line, which had been feeding him up until this point. After morning rounds on Sunday, February 5th, we were told we could take him home.

Obviously, there’s more to share but at present, I’m in that whole, “Holy sh*t! I have a baby and I don’t know what the hell I’m doing phase”. Today is actually my first day with him alone and I hope it goes smoothly and doesn’t become something that he needs to talk to his therapist about.

I just want to say again how much I’ve sincerely appreciated all of your thoughtful, encouraging, kind posts and emails during this time. To be honest, I’m a little shell shocked from the past couple of weeks. Weeks? Who am I kidding! YEARS! Infertility, financial strain, emotional strain, a difficult pregnancy, a last minute C-Section and then the baby having to be in the NICU. I’m beginning to think I need an exorcism.

The thing is that you guys have been here with me through it all and for that, I’ll never be able to repay you. You’ve been my virtual form of Prozac and you have found my uterus as challenging and funny as I do. You are my kind of people and I thank you from the bottom of my heart.

Scroll to Top
We use cookies to ensure that we give you the best experience on our website. If you continue to use this site we will assume that you are happy with it.OK