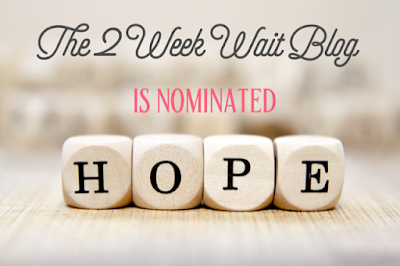 This week, the nominees for Hope Award for Best Blog by Resolve were “released” and I’m humbled and fortunate to be recognized and included in this truly kick ass list. This is the second time I’ve been nominated which makes me feel a little like Susan Lucci (super throwback reference but those who get it know exactly what I mean) but really, given how many powerful and emotional blogs were submitted, it’s no bullshit when I say it’s an honor for anyone to say, “Hey. You. That post. It had some real feels in it. Thank you.” (The post in question can be found here.)

I should mention that in general, I don’t “win” things. I’m not a winner. I’m a former stand-up comic whose routine for 12 years (when I had the energy to perform) was primarily about how much of a winner I’m not. In fact, the only thing I can recall ever winning was in May 2015 when I was 8 months pregnant and at a fundraiser that my sister was being honored at. Yes, my family is a bunch of active do-gooders. In her case, she and her family had made a noteworthy impact on Seatuck Environmental Association. Even though I was notably huge at the time, there was no way I was missing it. The big raffle of the evening was for a bottle of champagne and somehow, through dumb luck, I won. When you saw me waddle up to get the bottle, there was an audible gasp from the room as clearly, the silliness of a pregnant woman winning alcohol was not lost on everyone. Later on that night, a guest took me aside in the bathroom to give me the wise advice of, “Wait till you have the baby before drinking.” Ummm, ok. Thanks. What’s even funnier is I don’t drink. Like ever. Anytime I drink, I fall dead asleep. Being that I think I’m more fun conscious (some may disagree), I tend to stick to Shirley Temples. Soooo, yeah. That was my one and only big win.

It’s not that I have a defeatist attitude but really, when you read this year’s nominees (click here to see the list and to vote), you can’t go “wrong” with anyone you vote for. I’ve known ALL of these blogs for a while now and in the case of Angie Life, I’ve had the extreme

pleasure of meeting Angela in person and I adore her. She has been a hard core advocate who shared her story openly and publicly this past NIAW and took the lead on social media for this year’s advocacy day. This is not at all to take away from the other two nominees as Lauren and I have been connected online for years and let’s face it, if there were a blog award for ‘Wittiest Name”, she’d win hands down. Each one of these posts including, Jessica of A Hummingbird Paused, bring a different view point to the table and really, you have to vote for which one resonated with you.

Last year, when I was nominated, I “lost” to Shelley and let me tell

you – when I read the blogs that were nominated then, my first thought was, “Damn. I’D vote for Shelley!” It was a really good post and very much deserved to win (click here if you’d like to revisit it).

But here’s the point, when I “lost”, nothing really changed for me. I still care a f*ck ton about infertility advocacy, worked with the fabulous Candace (her blog here) on content for advocacy day, I met with my senators and representatives about infertility access, attended two press conferences (and even spoke at one) in support of FAFTA and I continue to write on infertility passionately and often.

My point? Win or lose, this is an honor but ultimately, I will remain as active as I ever was. I’m almost like an STD you can never get rid of. (See? Even my metaphors don’t scream “winner!”)

And that leads me to what is most on my mind… the FAFTA bill.

This is something that I’m getting my kick ass boots on for and have already contacted my local NY reps to discuss. It will create access to IVF, oncofertility preservation, and provide compensated gestational surrogacy in New York. If we have a Starbucks on every corner and can get Chinese food at 2am, we should at least have fertility rights that are more in line with this century, no?

moment), I’m talking about The Fair Access to Fertility Treatment Act (S 3148A and A 2646A), which adds IVF coverage, and fertility preservation for cancer patients, to New York’s insurance law, and for The Child-Parent Security Act (S 17A and A 6959A), which legalizes gestational surrogacy in the state. Resolve has created a page/letter you can go to immediately to write YOUR reps to support these bills. Click here for that.

Before I close, I’d like to acknowledge how many links I have in this post! Thank you and sorry for that. I’m link happy!

As always, thank you for reading and if  you’d like to vote, you can go here (another link) before October 13th! (By the way, if you live outside of the United States, you can choose “none”’ at the bottom of the States drop down list).

1 thought on “Hope Award and Fighting for FAFTA”