First, I’d like to start with a few of the “fertility fun” highlights from this past week:

It’s sincerely that I don’t mean to make fun of anyone (no really – I truly don’t). It’s more that enjoy these little anecdotes because, as I’ve mentioned more times than I can count on this blog, I’m a big proponent of having a sense of humor at all times. (Well, that and I’m STUNNED at how many people don’t know their bodies, how babies are made, that age matters and that semen can’t get “time out for good behavior”.) Whenever I’ve come across someone who is born without the “funny gene”, to me, it’s one of the absolute saddest medical conditions imaginable.

“Slip on two bananas… and call me in the morning.”
I’ve been lucky in that I haven’t offended too many people over the years as I can have a bit of a warped sense of humor. For whatever reason though, the infertility community in particular seems to share my sense of humor and for that, I’m exceedingly grateful. I can honestly count the people I’ve offended on one hand (At least the ones I know about…) and although I wish these individuals well, I wish more that they would stop taking things so damn seriously. Their lives would be way happier if they learned to laugh.
I’ve mentioned in previous blogs that my father has been having health issues and my son (who has you know, I conceived through my third IVF) has been diagnosed as being on lower end of the Autistic Spectrum. Both of these events have been stressful, concerning and at time, scary.
My dad, who I absolutely adore, had a tumor/cyst in his pancreas. When you hear the word ‘pancreas’, you always think, “Uh-oh”. Those who have been diagnosed with pancreatic cancer have, from what I understand, a 95% mortality rate. Yikes.
After many, many tests, it was determined that my dad needed to have his pancreas, spleen and gallbladder out. I told my father, “You’re like the actual guy from the game, OPERATION.”
And you know what he did? He laughed.
After the nine hour long surgery, through what I can only describe as a miracle, he was able to keep a portion of his pancreas as well as his spleen. They also confirmed that he was cancer free. To celebrate, I gave him a plush pancreas. 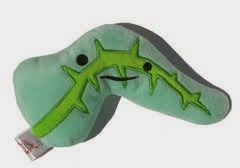 We’ve named him Pete. Now, when my dad’s friend’s come over, he asks them if they want to see his pancreas and when they reluctantly answer, “Uhhhh, ok. I guess.” He hands them Pete, the Pancreas.
I also love that my father traded in his extremely dated cell phone (his cell may have been the only rotary cell phone in existence) for the latest, hippest i-Phone. His logic was, “I need a new phone to go with my new pancreas!!!!”
Around the same exact time (when it rains, it pours), my son was diagnosed as having a speech delay (although I think that since he’s living with me, he just can’t get a word in edgewise) and again, has several “ASD qualities”. Through Early Intervention, he is excelling in leaps and bounds and we couldn’t be more grateful. His team consists of three different therapists who come six days a week and two nannies.
Yes. Two nannies. Let me explain…

My parents used to watch MJ Monday and Tuesdays but due to my dad’s recent health issues, they had to stop. Since our current nanny (who we’ve had since MJ was 3 months old and watches him Wednesday through Friday) didn’t want to work full time, we found a newnanny who is also a licensed art and music therapist and, in the words of my husband, looks like a super cool version of Velma from SCOOBY DOO. We adore her, the ukulele she brings with her (Can one adore a ukulele??) and love that he is getting a creative outlet in addition to everything else.
So, we have three therapists, two nannies and I’m not even a celebrity. I don’t even have the income, toned arms or apparent “magic eggs” of a celebrity. Early Intervention is covered by the city and our nannies are remarkably reasonable (THANK YOU ECONOMIC GODS).
It’s a weird feeling to know that while you’re at work, more people are cramped in your railroad apartment then when you’re actually at home. It’s like our home is FANTASY ISLAND or THE LOVE BOAT as you never know who is going to stop by that week. All in all, it’s really inspired me to clean more often as we continually have guests. Really, when they say a guy “gets more ass than a toilet seat”, trust me – not my toilet seat. It gets more ass than George Clooney.
Some have asked why I don’t stop working and stay home. Aside from the fact that we couldn’t afford that, I honestly think that when it comes to his issues, he’s in better, more capable and educated hands the way things are now. I majored in theatre; I write and used to do stand-up comedy. I couldn’t be his speech therapist or work with him on his “Applied Behavior Analysis”. The only thing I CAN do is love him, support him and tell him the best well-written knock knock jokes a two year old has ever heard.
There have been some suggestions but those who did not need the fertility arts if IVF is the reason MJ is having these issues. I feel like there’s always one story or another pinning something or other on IVF (Cancer, Autism, etc.) Next thing you’ll know, IVF will be responsible for Global Warming and the missing Malaysia Airlines Flight.
I was fortunate enough to meet the amazing Carolyn Savageand the inspiring Lisa Stark (who works at the SHER Institute) who both assured me that the Autism/ICSI/IVF link was recently disproved. Lisa was even kind enough to share Dr. Sher’s Blog on the subject (Click HERE to read).
In the midst of dealing with all of this (dad, MJ, a staff of five, a busy day job, lamenting over my non-toned arms, etc.), I remembered a post I wrote ages ago called, “The Infertile Plans a Baby Shower“.
I recently decided that now that my father was on the mend and my son is getting the resources he needs, there was no better time than to make that post a reality.
Therefore, I’m planning, what I’m calling, “THE NO BABY SHOWER”. It will be held in New York City on Saturday, April 26th (please contact me at the2weekwait (at) gmail.com for specific details). There’s no charge, no catch – it will just be people getting together, eating some brunch, playing pin the tail on the sperm, getting a goody bag filled with OPK’s and best of all, laughing at infertility with people who understand.
Despite everything, I have so much to be happy about. My dad is going to be ok, I truly believe MJ will also be ok (as long as we’re doing everything we can for him), I love my job (even the silly questions I get asked) and I feel like I’ve taken this infertility thing that tortured me for so long and have laughed in it’s face.
Infertility is NOT funny and I know this. I also know the person I was while going through treatment: Bitter, resentful, depressed, feeling like a failure and wondering if it was a nightmare I would ever wake up from. That’s why it’s so important to throw each other life lines and say, “I’ve been there, it sucks. How can I help?” My warped sense of humor is the best way I know how. Jokes about having difficulties conceiving doesn’t solve the problem but if it buys you even a few minutes of sanity, it’s worth it. Don’t you think?

I do hope any of you within traveling distance will join the “No Baby Shower” and that I’ll get to meet you in person!

13 thoughts on “Pin The Tail on the Sperm”