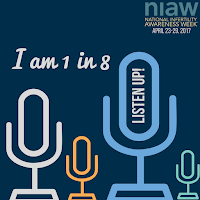 So, listen up – I am a proud one in eight, I’m an infertility advocate and I’m not going anywhere.