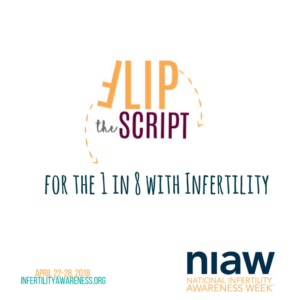 This is not going to be your ordinary National Infertility Awareness Week post. This is an official, raw, blunt call to action. I’m serious. I’ve had it. I’m officially getting fed up and I plan on putting the “war” in “Social Warrior”.

Let’s start with the beginning of this month, shall we? April 1st. Despite numerous warnings all over social media begging people NOT to post fake pregnancy announcements and memes stating that infertility affects one in eight, and how pregnancy loss impacts one in four, people still posted them including Bachelor Arie Luyendyk Jr. who pulled an April Fools’ Day pregnancy prank. In addition, journalist, Marissa Miller, wrote an all-out distasteful piece for Elite Daily (she removed her name from it when she received backlash from the infertility community) about how she fooled her husband by saying she was pregnant when she wasn’t. In both cases, infertility was a punch line. For many like myself, it’s a reality. While we absolutely have a sense of humor about it at times, making our medical condition the butt of a joke isn’t particularly funny.

Research has shown that the stress levels of women with infertility are equivalent to women with cancer, AIDS or heart disease, so there is no question about infertility resulting in enormous stress, yet when there is push back on these jokes or pranks, we’re told we’re being “too sensitive”. Would someone who has cancer be told the same?

On that note, you know who is also not taking us seriously? Our lawmakers, representatives, government, insurance companies and employers. The World Health Organizations recognizes infertility as a medical diagnosis and yet in America, only FIFTEEN states offer insurance coverage for infertility treatment. 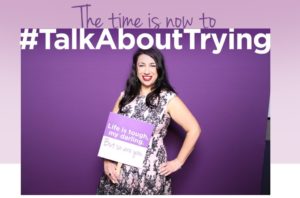 There are companies who are, simply put, capitalizing on the fact that infertility is not covered. They
are making money off of the fact that our medical issue is considered “elective”. Fertility treatment is roughly a 7-billion-dollar industry and entrepreneurs have taken notice of this. Companies are seeing there is money to be had and that desperate people are willing to pay anything for just a chance, not even a guarantee, but a chance to maybe have a child.

TO BE CLEAR: I’m not saying all of these companies are evil or ill-intentioned. Some of them are trying to fill a gap, some of the founders have even gone through treatment themselves and some of them even contribute to helping advocate on behalf of the infertility community. But let’s be real too: Some of them don’t give a damn.

I’m on the board of the Advocacy Day planning committee this year and on one of the early calls, I was saying to the group that to me, “Flipping the script” means that on May 23rd, it’s the one day WE GET TO SPEAK FOR OURSELVES. Us. Not the people who think fake pregnancy announcements are funny. Not the companies. Not the lawmakers. Not the 7 of the “1 in 8” but US. The 1’s (if you will). Flipping the script is owning the conversation so we represent ourselves and get the message we need to get out that really, infertility is a medical issue and NOT a personal failure. We need medical care or access to family building options.

And in the sprit of “flip the script”, owning the conversation, and how I started this blog post of being fed up – I need to share with you that I can’t believe I’m going to advocacy day again this year to be like, “Hi. Me again. Asking for the same thing I’ve been asking for the past five years. Please take infertility seriously. I have friends who are about to do their thirteenth IUI that isn’t going to work because they can’t afford IVF. They work for a company who only has 200 employees, so any company that offers fertility benefits won’t work with them and they are in a state that isn’t mandated, soooo really, could you possibly help????”

I know it’s hard to come out of the closet and speak for yourself. Many who deal with infertility stay silent due to feelings of failure, embarrassment or shame. I know this because that is exactly how I was. I was absolutely terrified people would know I couldn’t conceive on my own. Yet, as long as we stay silent, as long as we don’t advocate on our own behalf to lawmakers, our HR department or even to our friends and family to educate them on the fact that infertility is an actual medical issue, it will be “the 7” not impacted by infertility that will control the conversation.

There is no shame in having diminished ovarian reserve, a sperm quality issue, a genetic disorder, blocked fallopian tubes or recurrent pregnancy loss. Any medical reproductive issue does not define your womanhood or manhood just like being diagnosed with diabetes or epilepsy doesn’t define who you are as a person.

As I said, this is a call to action. If you can’t “come out of the infertility closet” or even if you can but can’t make it to advocacy day, PLEASE write letters to your lawmaker, state representative and/or your Human Resources department. As melodramatic as this sounds, YOU ARE A HUMAN BEING WITH A MEDICAL ISSUE. If we don’t start believing that, owning that, explaining and educating others on that, we’re never going to change others thinking. We just can’t continue to let “the 7” do the talking. Please, “flip the script” with me. Let’s make THIS the year we see real change.